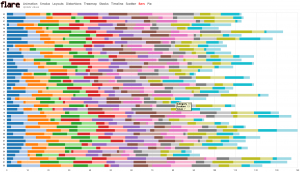 I am not a big fan of Adobe Flash, but this project is brilliant!! It allows you to create dynamic graphs for a website and unlike Java based applets, it loads quickly and without hassel, even on my Linux machine (Java applets currently not working for me). Go check out the demo at: http://flare.prefuse.org/demo/

SnOil is a physical display based on ferrofluids designed by Martin Frey, a researcher and artist from the Berlin University of the Arts (or “Universität der Künste Berlin”, for those of us who speak German :). It employs ferromagnetic fluid and a matrix of electro magnets to create a display where the individual pixels are shaped by raising the ferrofluid above the electromagnets.

How cool is that! You can play snake on it by using the built in tilt sensors! Check out the video on his website and see how it works.

The problem:
I am using an interface from National Instruments for the General Purpose Instrumentation Bus (GPIB) and when I tried to execute the program in the terminal, I only got an “Aborted” message back. The program had been working before and still compiled without errors or warnings but it would not execute. The program terminated imediatey after it was called, before even entering main().

The steps to take are similar to the initial installation. The following steps are quoted directly from the NI 488.2 README file:

Now go to /usr/local/bin and run the “updateNIDrivers” utility as root. That should update your NI driver and remove the problem.

zotero, very neat Firefox extension. It helps one to find and track bibliography references from the web and unlike one of the web-based services, it keeps the data on your hard drive.

Update:
With the move to the new extension method in firefox 57 i.e. quantum, the old extension doesn’t work any longer. Please find the Zotero connector at https://www.zotero.org/download/.
For a list of other useful extensions and alternatives that work with the new browser version, you may wish to look here:

Today, while reading up on possible suppliers of HV-supplies, my Adobe Reader complained that it could not read part of a document without the Japanese language extension pack. Very conveniently the pop-up warning message contains the address of the adobe website where one can download the language extension for free (make sure you get the correct file for your version of acrobat reader):
http://www.adobe.com/products/acrobat/acrrasianfontpack.html

Its a simple matter of unpacking the tar.gz file, entering the created folder (“JPNKIT” in my case) in a terminal window, switching to root and typing: ./INSTALL
However, as part of the installation procedure, the install script asks for the correct location of your Adobe Reader installation. Now maybe it’s because I am not a linux Pro, but I did not know which directory the script was asking for. It was not the /usr/bin/acroread path. After a very unlucky search on google for the correct path, I finally figured it out. The path to use was the following:
/usr/lib
The installer finished and I can go on with my work. Maybe someone out there will find this post helpful.